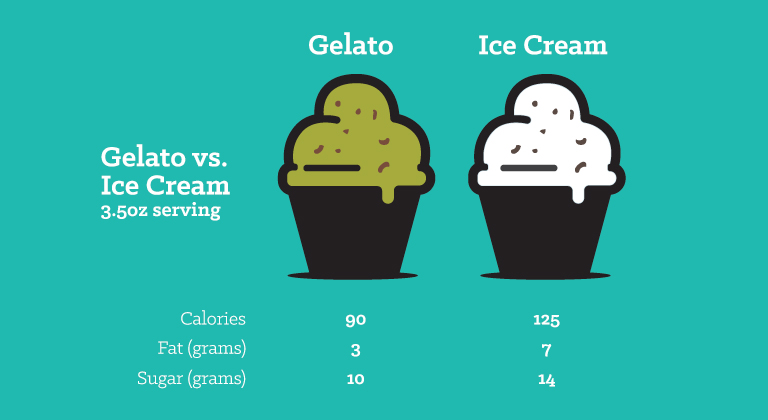 Although they are both frozen treats, Gelato and Ice Cream are different from each-other. The four characteristics that set Gelato apart from Ice Cream are: ingredients, fat content, air, and serving temperature. These differences result in Gelato’s richer flavor and smoother texture.

Did you know that Gelato has a lower fat content?  The FDA defines that at least 10% of Ice Cream calories must come from milk fat. But in your typical carton of ice cream, up to 25% of its calories can come from fat.  In Gelato, the fat content ranges from 4% to 9%. These fat percentages are in direct relation to ingredients used.

Gelato and Ice Cream share three main ingredients: dairy, sugar, and air (we’ll get to air in a minute).  The differences between the two come down to percentages used of these main ingredients.

Don’t let the smaller size of Gelato fool you. Downing a pint of gelato is simply more impressive than downing a pint of ice cream.  Ice cream contains more air than Gelato which is a result of the faster turning during the creation process.  This makes it lighter. This process increases the volume of ice cream being produced which is nice for profit.

Gelato on the other hand has 35% less air resulting in it being creamier.  The higher density in Gelato delivers a smoother and silkier consistency that packs more flavor per bite.

Gelato is served 10-15 degrees warmer than Ice Cream which keeps your taste buds warmer and allow you to savor the flavor better than you would with Ice Cream.

Ice Cream is traditionally served at a colder temperature which can lead to ice crystals forming.  The higher percentage of fat content combined with the lower temperature leads to a harder product.  Ice crystals which can numb your taste buds combined with a higher butterfat content that coats your tongue can mute ice cream flavors.  This is not to say all ice cream is like this.  Not at all, it just takes more care and attention to overcome these traits.

Lastly, since Gelato is softer it is served using spades. Ice Cream, being firm, is scooped into balls.

Whether you are enjoying a Gelato or Ice cream straight from your freezer, let it sit out on the counter for a few minutes to let it soften. You will enjoy the increased flavor intensity that is a result of your frozen dessert being served at a warmer temperature.